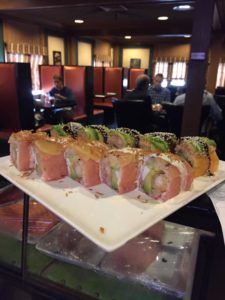 Japan is an island nation, with its surrounding seas warned by Kuroshio, the plankton-rich Japan Current, As well as an astonishing variety of fish and shellfish. The islands themselves are quite mountainous, and what little arable land exists is terraced and carefully cultivated to coax rice and a few other crops from the soil. Japan has always fed its dense population from both the seas and rice fields, so it is natural that its cuisine emphasizes that which nature provides. Sushi, the combination of raw fish and seasoned rice that seems so exotic to foreigners, is a supremely logical food in Japan.

Sushi originated centuries ago in Japan as a method of preserving fish. It is told that the origins of sushi came from the countries of Southeastern Asia. Cleaned, raw fish were pressed between layers of salt and weighted with a stone. After a few weeks, the stone was removed and replaced with a light cover, and a few months after that, the fermented fish and rice were considered ready to eat. Some restaurants in Tokyo still serve this original style of sushi made from freshwater carp (it is called Narezushi), however its flavor is so strong that it obscures the fish’s identity altogether, and Narezushi is something of an acquired taste.

It wasn’t until the 1900’s that a clever chef named Yohei decided to forego the fermentation and serve sushi in something resembling its present form. It became very popular and two distinct styles emerged: Kansai-style, from the city of Osaka in the Kansai region, and Edo-style, from Tokyo, which was the called Edo. Osaka has always been the commercial capital of Japan, and the rice merchants there developed a sushi that consisted primarily of seasoned rice mixed with other ingredients and formed into decorative, edible packages. Tokyo, located on a bay then rich with fish and shellfish, produced nigirizushi, featuring a select bit of seafood on a small pad of seasoned rice. Although the ornamental sushi of the Kansai region is still very popular, it is nigirizushi that foreigners are most familiar with. It is widely considered that nigirizushi is the origin of modern sushi.

Sushi is not fish…it’s the rice

Many people think of it as raw fish, but even though raw or cooked fish or vegetables may accompany the rice, sushi refers to the rice itself and not the topping. Raw fish served on its own is known as Sashimi in Japan. Today when we hear the word “Sushi” usually the first image that comes to mind is that of “Nigirizushi”, also known as “Edomaezushi”. This style was made popular in Tokyo (then called Edo) during the 1800s. Edomae means “in front of Edo”; the fish used in Edomaezushi was caught in the bay in front of Edo city. This type of sushi consists of a small ball of rice with a slice of fish or other topping.

It was a kind of fast food, sold from small booths located around the city. Other accounts state that it became popular from being sold as snack during the intermissions of Kabuki Theater. Either way, it caught on both for the good taste or because it could be prepared quickly, which was important to people with the busy lifestyle of Tokyo in the nineteenth century.

Over time, using rice to preserve fish disappeared in many countries because shortages of food made the rice too valuable to be wasted. In Japan, people instead shortened the curing time to about a month then ate both the fish and the rice. The fish was closer to being raw, but both fish and rice had a slightly sour flavor thanks to the limited fermentation.

Eventually it was found that preparing the rice with vinegar would provide a similar flavor while at the same time reducing the curing time to a few hours or overnight. This method still survives in the style known as Narezushi. Other modern sushi varieties are meant for immediate consumption but Narezushi is left to cure for at least 24 hours before serving.

Those rolls are makizushi

Makizushi is sushi that has been placed on a sheet of nori, and then rolled into a cylinder with bamboo mat (makisu). Maki means roll; this type is also known as norimakizushi or just norimaki. It is older that nigirizushi, predating it by about a century. After rolling, the makizushi iscut into 6 or 8 slices to make bite sized pieces.

There are different kinds of makizushi:

Temaki is usually translated as hand roll (it means hand) as the roll is made entirely with the hands and not with the makisu. To make temakizushi, a half or quarter piece of nori is held in one hand and rice is placed in the center with the other hand. The filling is placed on top of the rice, and then everything is rolled into a cone or cylinder (the cone shape is the more common of the two).

Temaki is eaten by hand, not with hashi (chopsticks). When temaki is made in a cone shape, it can contain more filling (fish, vegetable, etc.) than the equivalent norimaki. For this reason they are both more expensive and more enjoyed by the person eating the temakizushi.

Eating it this way allows room for more experimentation by combining different ingredients than would otherwise be available at a restaurant – you’re not likely to find uni/ikura/hotate maki in a restaurant, but it’s easy to make at a temaki party at home – highly recommended too!

Gunkan maki is a variation of nigirizushi. A slightly smaller amount of rice is used, and then surrounded by a strip of nori about twice as tall as the rice to form a container that can hold fish or roe which is too small to be served in slices. This is the typical way to serve ikura (salmon roe), tobiko (flying fish roe), uni (sea urchin roe), or other small items.

Gunkan means battleship; it gets that name from the shape of the sushi, maybe also for the protective wall of nori around the contents.

Chirashi sushi is unlike all other kinds of sushi

Even though it consists of rice with fish and vegetables, the preparation and presentation is different. All other types of sushi are somehow pressed together, either by hand, with a rolling mat, or in a mold. All other types are also served in individual pieces, usually to be eaten in a single bite.

Chirashi on the other hand is never squeezed or pressed; the sushi meshi is scooped into a bowl. The fish and vegetables are spread out on top of the rice. Chirashi means to scatter, and the first time someone outside of Japan sees chirashizushi, he or she will likely think it is a rice salad.

Chirashi can be served in individual bowls (most common at a restaurant), or in one large bowl to be shared by everyone at the table (more common at home). To eat chirashi, you may either dip the pieces of fish in shoyu and eat as sashimi or put the fish back in the bowl, scooping up some rice to eat it together with the fish. This is an easier way to serve sushi to a group of people, as the cook doesn’t have to take the time to make individual pieces for everyone.